From Wikipedia, the free encyclopedia
Jump to navigation Jump to search
American academic, writer and poet

Emerson was born on January 13, 1957 in Chatham, Virginia, and graduated from Chatham Hall preparatory school in 1975.[5] She received her BA in English from the University of Virginia in 1979 and her Master of Fine Arts in creative writing at the University of North Carolina at Greensboro in 1991.[1] 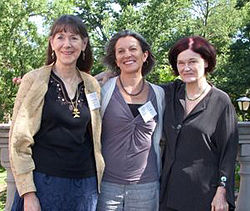 Three collections were published posthumously, The Opposite House (March 2015), Impossible Bottle (September 2015) and Claude before Time and Space (February 2018).[6]

In addition to her collections, Emerson's work has been included in such anthologies as Yellow Shoe Poets,[7][8] The Made Thing,[9][10] Strongly Spent: 50 Years of Shenandoah Poetry,[11] and Common Wealth: Contemporary Poets of Virginia.[12]

Emerson served as poetry editor for the Greensboro Review and a contributing editor for the literary magazine Shenandoah.[1][13] In 2002, Emerson was Guest Editor of Visions-International (published by Black Buzzard Press).[citation needed] On August 26, 2008, she was appointed Poet Laureate of Virginia, by then Governor Timothy M. Kaine[14] and served until 2010.[15] In 2008, she returned to Chatham Hall to serve as The Siragusa Foundation's Poet-in-Residence.[16]

She taught at several colleges including Washington and Lee University in Lexington, Virginia and Randolph-Macon College in Ashland, Virginia. She spent over a decade at the University of Mary Washington, in Fredericksburg, Virginia, as an English professor and the Arrington Distinguished Chair in Poetry.[17]

In 2013, Emerson joined the creative writing faculty at Virginia Commonwealth University in Richmond, Virginia, where she taught until her death in 2014 from colon cancer at age 57.[18][19]

Emerson married musician Kent Ippolito in 2000. The couple lived in Richmond, Virginia, and performed and wrote songs together.[20] After missing most of the Fall 2014 semester while seeking cancer treatments, Claudia Emerson died on December 4, 2014, in Richmond at the age of 57 from complications associated with colon cancer.[4][1][19]

This list is incomplete; you can help by adding missing items with reliable sources.