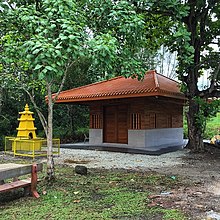 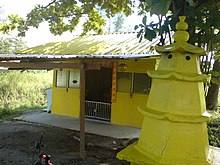 The German Girl Shrine is a shrine on the island of Pulau Ubin in Singapore. It marks the site of the burial of an unknown 18-year-old girl who died on the island in 1914 after falling from a cliff while fleeing from British forces who sought to detain a number of German nationals then resident on the island. Her body was recovered and interred in an urn on the site by Chinese workers, and a makeshift shrine structure was built. The site was visited frequently by gamblers who thought the spirit of the girl would bring them good luck. A permanent structure was erected in 1974 by a company carrying out quarrying on the island. Quarrying has since ceased, and the shrine is now within Ketam Mountain Bike Park. Visitors often leave offerings, including makeup and Barbie dolls, at the site.

In the 1910s, the island of Pulau Ubin in the British Crown Colony of Singapore was home to two German families (the Brandts and Muhlingans) who ran coffee plantations.[1] The island was also a key source of granite used in the construction of buildings and infrastructure on the Singapore mainland and was home to a number of quarries.[2] The outbreak of the First World War, in which Germany was in conflict with Britain, in July 1914 led the British to detain German nationals on security grounds. A British military force was sent to Pulau Ubin to detain the Germans but the 18-year-old daughter of one of the families fled from the British forces into a wooded area. A number of days later her body, covered by ants, was discovered by Boyanese plantation workers; the girl had died after falling down a cliff near to a quarry. The workers covered the body with sand, laid down flowers and lit incense before offering prayers for the girl, whose name is not known.[1]

Chinese workers later recovered the body and buried the girl at the crest of a hill above the quarry.[1] She was interred in an urn together with a crucifix (the girl was Roman Catholic) and a number of coins.[3][4] A makeshift shrine was constructed over the grave which became associated with good luck. Gamblers from Singapore and the Malay peninsula visited the shrine to make offerings in the hope that the spirit of the German Girl would bless them with good fortune.[4] In 1974 a quarrying company constructed a more permanent shrine, described as "a small yellow Chinese temple", on the site.[4][5] It is believed that the girl's remains were exhumed at this time and her remains placed in an urn at the site.[6]

Quarrying declined on the island from the 1970s, with the last site shutting in 1999.[2] The number of residents dropped from around 2,000 to fewer than 100 and the island became a refuge for wildlife.[2] The shrine, in the south-west of the island, is now located within Ketam Mountain Bike Park.[3]

The German Girl Shrine continues to attract visitors who leave offerings of nail polish, perfume, makeup and Barbie dolls for the spirit of the girl.[4][2] The shrine has been adorned with Christmas decorations.[2] The shrine, which attracts an average of four to five visitors a week, was renovated in February 2015.[6]