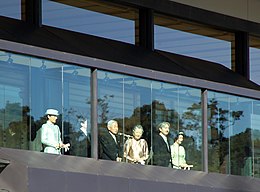 The Imperial family on the birthday of Emperor Akihito, 2005

The Emperor's Birthday (╠ý╗╩ŇQ╔˙╚Ň, TennĘş tanjĘşbi) is an annual national holiday in the Japanese calendar celebrating the birthday of the reigning Emperor, which is currently 23 February as Emperor Naruhito was born on that day in 1960, enforced by a specific law, "The Law for Special Exception of the Imperial House Law concerning Abdication, etc. of Emperor" (╠ý╗╩Ą╬═╦╬╗Á╚Ą╦ÚvĄ╣ĄŰ╗╩╩ĎÁń╣á╠ě└řĚĘ) of 2017.[1]

During the reign of Emperor Hirohito (the ShĘşwa period, 1926ĘC1989), the Emperor's birthday was observed on 29 April.[2] That date remained a public holiday, posthumously renamed Greenery Day in 1989 and ShĘşwa Day in 2007.[3]

Until 1948, it was called TenchĘşsetsu (╠ýÚL╣Ł), "TenchĘş Festival". TenchĘşsetsu paralleled ChikyĘ▒setsu (Áěż├╣Ł), "ChikyĘ▒ Festival", which referred to the Empress consort's birthday. The two names originate from the idiom in Chinese: ╠ýÚLÁěż├, borrowed from Lao Tzu's Tao Te Ching during the reign of Emperor KĘşnin, meaning "The sky and the earth, the universe is eternal," and expressed a hope for the eternal longevity of the reigning Emperor. After the war, the new government renamed it to TennĘş tanjĘşbi, in less formal language with a more literal meaning in 1948, when it was established as a holiday by law. Under the law, the National Diet must convene and change the holiday date before the reigning Emperor's birthday becomes a public holiday.[4] Thus, there exists a small chance that the former Emperor's birthday may come before the change can be made.

On the Emperor's Birthday, a public ceremony takes place at the Tokyo Imperial Palace, where the gates are opened (the palace is usually off-limits to the public). The emperor, accompanied by the empress, and several other members of the imperial family appear on a palace balcony to acknowledge the birthday greetings of well-wishers waving Japanese flags. This event is called Ippan-sanga (Ď╗░Ń▓╬┘R). Only on this occasion, and during New Year's celebrations on 2 January, are members of the public permitted to enter the inner grounds of the palace.[5] When the emperor completes his greetings, the crowd resumes the waving of flags, and the imperial family waves back.[6]

In 2021, the visit of the general public to the Imperial Palace grounds on the day to celebrate His Majesty the Emperor's Birthday was canceled due to the COVID-19 pandemic. Both the Ippan-sanga in the morning and the signing of the visitors' book (ËŤÄĄ (KichĘş)) in the afternoon were canceled.[7] Ahead of his birthday, however, in a video message recorded on 19 February, Naruhito spoke of his desire to reach out to a wide spectrum of people.[8]